This emaciated, female Boxer mix was found curled up on a porch in Anthem. The dog was fearful and growled when the homeowner put out food and water. Anthem Pets was contacted and immediately transferred her to Daisy Mountain Vet Hospital.

Named Thursday, this poor girl was a mystery: did she get loose or was she abandoned, and how long did she wander before curling up on that porch? But the pads on her paws were smooth and undamaged, not what you’d expect of a dog trying to survive outdoors. What is the answer?

We don’t know, but one possibility is even worse: that Thursday was kept indoors and starved before she escaped or was abandoned. Thursday received medical treatment and was brought back to health. Her weight went from 22 lbs to 46 lbs and with gentle hands, love and care, her fear of people left and she was adopted by her foster family. Amazing that this poor girl can distinguish between those who abused her and those who adore her, forgive us all and love people again. 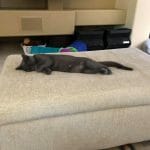 Every year thousands of kittens are abandoned across the United States. Bruce was one of these kittens and like so many others, he was completely unable to fend for himself. By the time he was rescued, he was underweight and looking scrawny. Thankfully, after his rescue he was adopted by Alicia K. In her home, he has been transformed into one of the handsomest boys in all of Anthem. He is now named Dorian and spends his days keeping his feline friends and family entertained with his antics.

Can you imagine someone abandoning an elderly dog with health problems? It does happen. In fact, it happened to this black cocker spaniel mix, who is now named Marge.

The day that Marge was dumped Mary Ann B. was answering Anthem Pet’s hotline. When a  call came in telling of an elderly female dog who had been dumped at a park, Mary Ann felt a tug at her heart. She immediately sent a team to rescue the dog and soon Marge began veterinarian treatment.

She underwent various exams and eventually surgery to remove seven mammary tumors. As Marge recovered from surgery, Anthem Pets began looking for a foster home for her, but unfortunately her condition suggested that it needed to be a special hospice foster home. Mary Ann B. volunteered to take Marge in.

To everyone’s surprise, she slowly recovered and has been beating all the odds for three years. Marge continues living in her happily-ever-after home with Mary Ann B., her family and a four-legged brother named Homer. 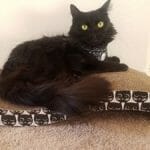 Every cat has a unique personality. Some are timid and shy, others are friendly and confident and a few are dominant but loving. Kittens and cats, like Koko, that fall into the dominant category are often abandoned or abused because people don’t know how to handle their personalities and quirks.

Koko was fortunate. She was adopted as a kitten by Patty A. As Koko grew into adulthood her dominant personality developed and she began to express a deep love for people, but a hatred for the other cats in the home. Like so many others, Patty could have returned or abandoned Koko, but she didn’t. Instead, she found a new home for her with Sophia R. Koko is now Queen Bee in a home without other cats and that is just the way that she likes it.

Male cats are independent, aloof and frequently aggressive. Right? Many people have this mental image of male cats, but they are often wrong and Finn is a great example of this. Patty A. adopted Finn as a kitten in November 2016. He quickly settled into his new home and began to show that he is a mild-mannered gentleman at heart. Today he considers himself not only Patty’s best friend and confident, but also something of a butler. He takes it as his personal responsibility to run to the door and welcome Patty’s guests with quiet meows and purring. 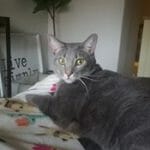 Numerous cats and kittens escape or wander away from their homes and become lost every year here in Anthem.  Since Suki was relatively well cared for when we rescued her in 2015, everyone suspected that she was lost, but all attempts to find her owners failed. She found a new family, though. Christine G. saw our advertisement looking for Suki’s owners and offered to adopt her if her original family wasn’t found. A few days later, Christine met Suki personally and immediately fell in love with the sweet, feisty young lady. Suki is now called Mia. She is always going to be a good reminder that all cats should wear identification tags, or even better yet, they should be microchipped, because not all lost cats have a happy ending like Mia

Enter your name and email address to get the latest from Anthem Pets Animal Rescue.